Meeting the Women in Chemistry 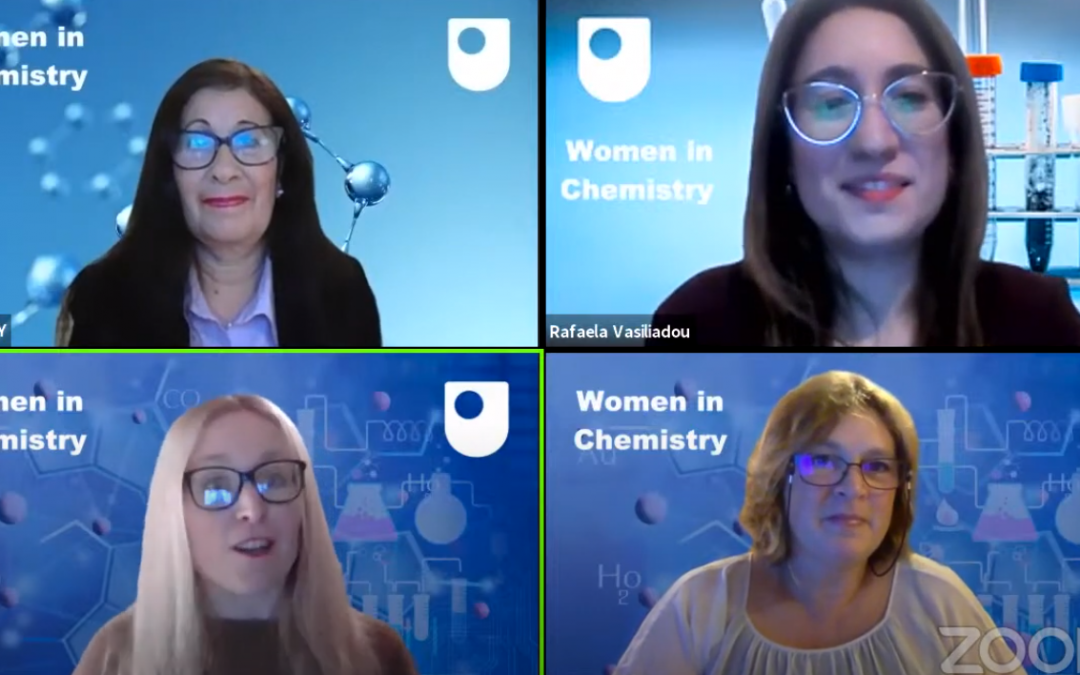 This week, its Chemistry week, and we attended the online event “Women in Chemistry”, from The Open University. Enthusiastically hosted by Dr Rafaela Vasiliadou, we heard from three inspiring women from different fields in Chemistry. They spoke openly about their successes and failures, their moments of inspiration and their struggles. Whilst the focus was on chemistry, they had advice and wisdom that could apply to anyone who is working towards a particular goal or career path.

First of all, we were introduced to Dr Helen Fraser, who works in the fascinating field of Astro-Chemistry.  Combining her interests of chemistry, physics and astronomy, Astro-Chemistry is a rich subject that studies the formation of planets and stars, by studying at a molecular level. Dr Fraser studied Chemistry at the University of Manchester, and it was whilst she was doing her PhD that she realised she could study astronomy. Whilst at summer school, it was a chance encounter over a couple of drinks that led Dr Fraser to starting a post-doc in Astro-Chemistry. One of Dr Fraser’s most recent achievements was highly publicised; she was part of the team that detected Phosphine on Venus, which attracted a media frenzy.

Secondly, we heard from Dr Louise MacBrayne, a close colleague of Dr Vasiliadou, our host. Dr MacBrayne’s passion for teaching shone through the way she spoke about her students and the way her career had led her to the teaching profession. Dr MacBrayne spoke emphatically about her love of practical science, and her industry work, which led to her receiving a sponsored PhD from Glaxo-Smith-Kline. Her work during this time involved improving the purity of widely-used Asthma drugs. Eschewing a traditional post-doc, Dr MacBrayne went on to work with a small start-up company, studying marine bacteria for novel anti-cancer properties. On an inspiring note, she talked about how she had to switch the entire focus of her PhD after 12 months of experiments had failed – particularly how she wanted to quit, but had the revelation that if science had worked all the time, they would all be out of the job. This experience was one that she would pass down to her students, whenever they had their own crisis of confidence.

Finally, we met Dr Corrine Kay, who had had a long career researching in the pharmaceutical industry, focussing on designing molecules that correct or halt the progress of disease. Dr Kay is currently writing a Masters course and a second Undergraduate course for the Open University, but as her talk went on, it was clear that this was just scratching the surface of her achievements. Describing how she had wanted to invent something since she was very little, Dr Kay did her chemistry degree at Lyon, before carrying on her studies at Teeside University. Despite a crash course English lesson from her mother, she was not prepared for lectures delivered in a broad Geordie accent! Following this, Dr Kay was part of the team who worked on the first HIV drug to hit the market. Carrying on her education through the OU, Dr Kay’s career also wound up at Glaxo-Smith-Kline pharmaceutical company, who would go on to fund her PhD – and it was what happened during this PhD that was really stunning.

Four days into her PhD, she discovered that she was pregnant – and she suffered from debilitating pregnancy sickness until the day she gave birth. Once she had given birth, she discovered that she could not get an extension to complete her PhD, because of the fact she was studying at Cambridge. Then, she became pregnant again. She described how she would type her thesis in one hand, whilst holding her baby in the other. She decided that if her baby wouldn’t let her sleep, she would write instead. When her maternity leave ended, and she was back to work full-time, she carried on writing it as a skeleton thesis in her spare time – writing a complete list of titles and subtitles, and then filling in the gaps 200 words at a time, on her train journey home each day. When the four years were up, she delivered her thesis on time. As a mother she described feeling guilty that she couldn’t spend more time with her children, but was holding onto advice from her colleague – that when they grew up, they would be proud of their mother.

In the world of PET-CT and Nuclear Imaging, we are desperate for more Radiopharmacists, a career path that begins with chemistry. So we praise the Open University for putting on such an inspiring talk. As the talk wrapped up, the three speakers passed on some final thoughts and wisdom – to follow your dreams, to never give up, to have a role model to look up, and during the hard times, to remember this: if you can do this, you can do anything.

You can watch this talk on Youtube, at https://www.youtube.com/watch?v=uKF8OJt625o&feature=emb_logo